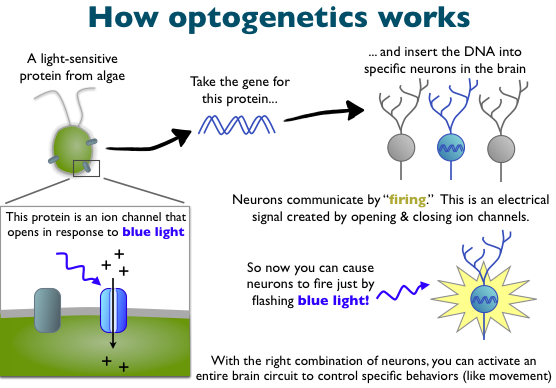 Optogenetics, the process of controlling brain cells using light, could be used to understand and treat brain diseases, including epilepsy and depression.   Previously, scientists relied on fMRI and a wire probe inserted into the brain to switch on cells.

The technique must be refined before it can be used in people or in remote parts of the brain.

Columbia’s Elizabeth Hillman describes the process:   “Instead of activating just one brain cell at a time with a probe, researchers had a way to cause large groups of cells to fire without touching them. You can select that very specific genetic cell type, and you can tell that specific cell type to react when you shine light on it.  First, though, scientists are going to have to overcome some big challenges.  You’re actually altering the genes of the neurons.”  That’s because most neurons don’t normally respond to light.  Genetic material must be added to every brain cell to control it.  Scientists can do that in mice with genetic engineering, but not in people.  Professor Hillman continues: “Another challenge for optogenetics has to do with delivering light to cells deep in the brain. It’s really hard to get light to go deep,and we all know this just from trying to shine a flashlight through our hand.”

Optogenetics is already changing our understanding of epilepsy.

According to Berkeley professor Hillel Adesnik, “Scientists have known for a long time that epileptic seizures occur when brain cells start firing out of control. But they’ve been struggling to understand the role of brain cells called inhibitory neurons, which can reduce firing in other cells. Prior to optogenetics, there was no way to control these neurons and test hypotheses. Now scientists have shown that by altering that activity of inhibitory neurons in mice, it’s possible to start and stop epileptic seizures.”